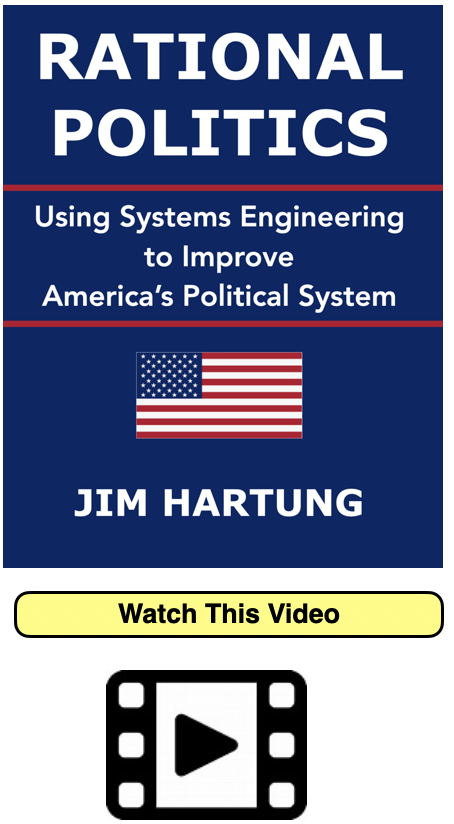 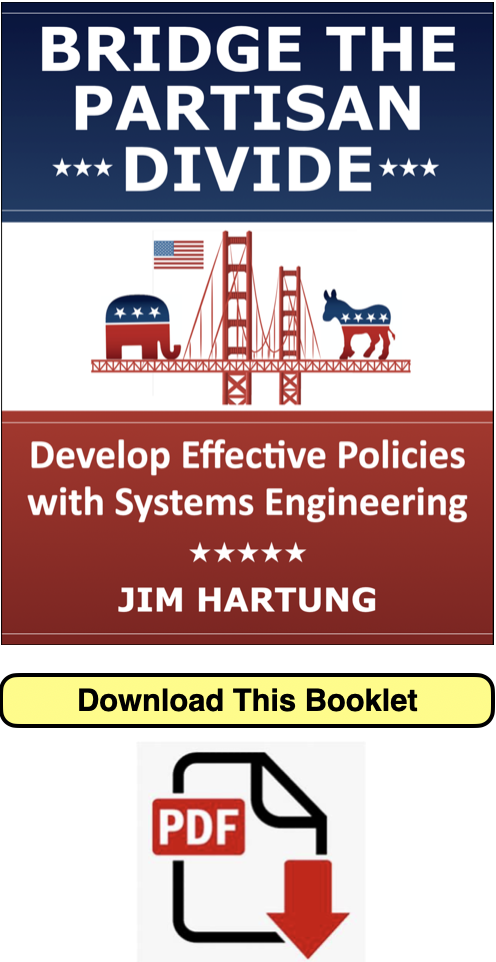 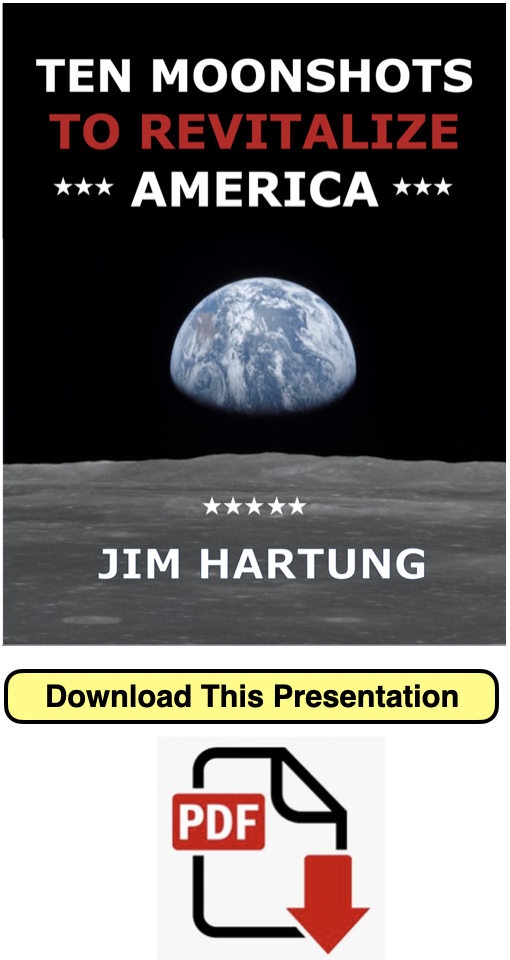 Congress and the president

Congress and the president are in an ideal position to lead a national discussion to fix our political system. The best way for them to lead is by implementing the SE process. To do this, Congress should take two actions. First, they should establish a new organization to develop nonpartisan proposals for Congressional consideration. Second, they should direct this new organization to propose solutions for America’s most serious problems and update their proposals annually.

No such organization exists today; this is a key reason why Congress is so dysfunctional. This new organization should be patterned after the Congressional Budget Office and the SE organizations in industries that use SE to develop complex products and systems.

This new organization might be named the Nonpartisan Solutions Office (NSO) because its charter would be to use SE and other fact-based and data-driven methods to develop practical, nonpartisan proposals to optimize social, economic, and political systems. Without an organization such as this, most political debates will never get past partisan bickering. With an officially sanctioned organization such as this, Congress will at least have “candidate” solutions to consider as the starting point in their deliberations.

This new organization would not make policy. They would use SE to develop practical, nonpartisan proposals that would be the starting point for Congressional debate and discussion. Congress and the president are the gatekeepers who decide when the organization’s proposals are good enough to be implemented.

Receiving annual proposals from this new organization will make Congressional discussion of America’s top issues a normal, routine process rather than a rare event. This will reduce political posturing, allow rational discussions of alternatives, and encourage continuous improvement. When discussions become routine, compromise is possible—and practical, nonpartisan solutions can be enacted.

If Congress uses SE to address societal problems, their example can be followed at state and local governmentsand internationally. This is not a pipe dream. If engineers can work together to develop complex products on highly political programs such as the International Space Station, why can’t Congress and the president work together to address America’s most serious problems? They just need a better process—the SE process.

People in other countries will also notice if Congress and the president begin using SE to address complex societal problems. SE could be a meme that spreads worldwide and provides a fresh approach to address difficult global, national, regional, and local issues.

Following is my list of America’s twelve most serious problems and some thoughts on how SE can help resolve them:

Wars and terrorism: A global strategy is needed to reduce wars and terrorism, including (and especially) the risk of nuclear war. This is an immense challenge, since history suggests that violence is ingrained in human nature. Nevertheless, SE could provide a logical framework for global discussions to address this issue.

Climate change: This is one of the world’s most serious problems, yet the world has been unable to agree on how to adequately address it. SE can help develop a practical plan to address climate change and obtain global consensus to implement it. Carbon dividends, as proposed in Rational Tax Reform, can be the starting point for developing a cost-effective, global climate change policy.

Social inequality: Social inequality is closely linked to economic inequality. Fundamental reform is needed to address the root causes of explicit and implicit discrimination on the basis of race, religion, gender, and other factors.

Justice system: We incarcerate too many people for too long, yet there is too much crime and those who serve time are often unprepared to re-enter society when they are released. A key goal of justice system reform should be to address the root causes of crime, violence, incarceration and recidivism.

Education: America’s education system is great for the brightest and most privileged students. However, it leaves too many students behind. The goal of education reform should be to ensure that all students have an opportunity to receive a good education at an affordable price and learn what they need to know to become good, productive, and happy citizens.

Governance policy: America’s governance policies are outdated. They need to be updated to promote good governance and eliminate the root causes of corruption. Reform is especially needed to improve campaign financing, ensure fair elections, and reduce patronage, especially appointments given to campaign donors and lobbyists.

Environmental sustainability: America enacted landmark reforms in the past few decades to promote clean air and clean water. However, much more remains to be done, both domestically and internationally, to protect the environment. Reform is especially needed to (1) protect the world’s oceans and biodiversity, and (2) use water, soil, and other natural resources sustainably. Environmental sustainability is closely linked to climate change, but climate change should be treated as a separate issue because of its uniqueness and importance.

Tax reform: The tax system is a “root cause” of many of America’s most serious economic, social, and political problems. To address these problems, we must eliminate the root cause. This requires fundamental and comprehensive tax reform. The tax reform proposed in Rational Tax Reform can be the starting point.

This figure below summarizes these top 12 problems and the key interactions amongst them. 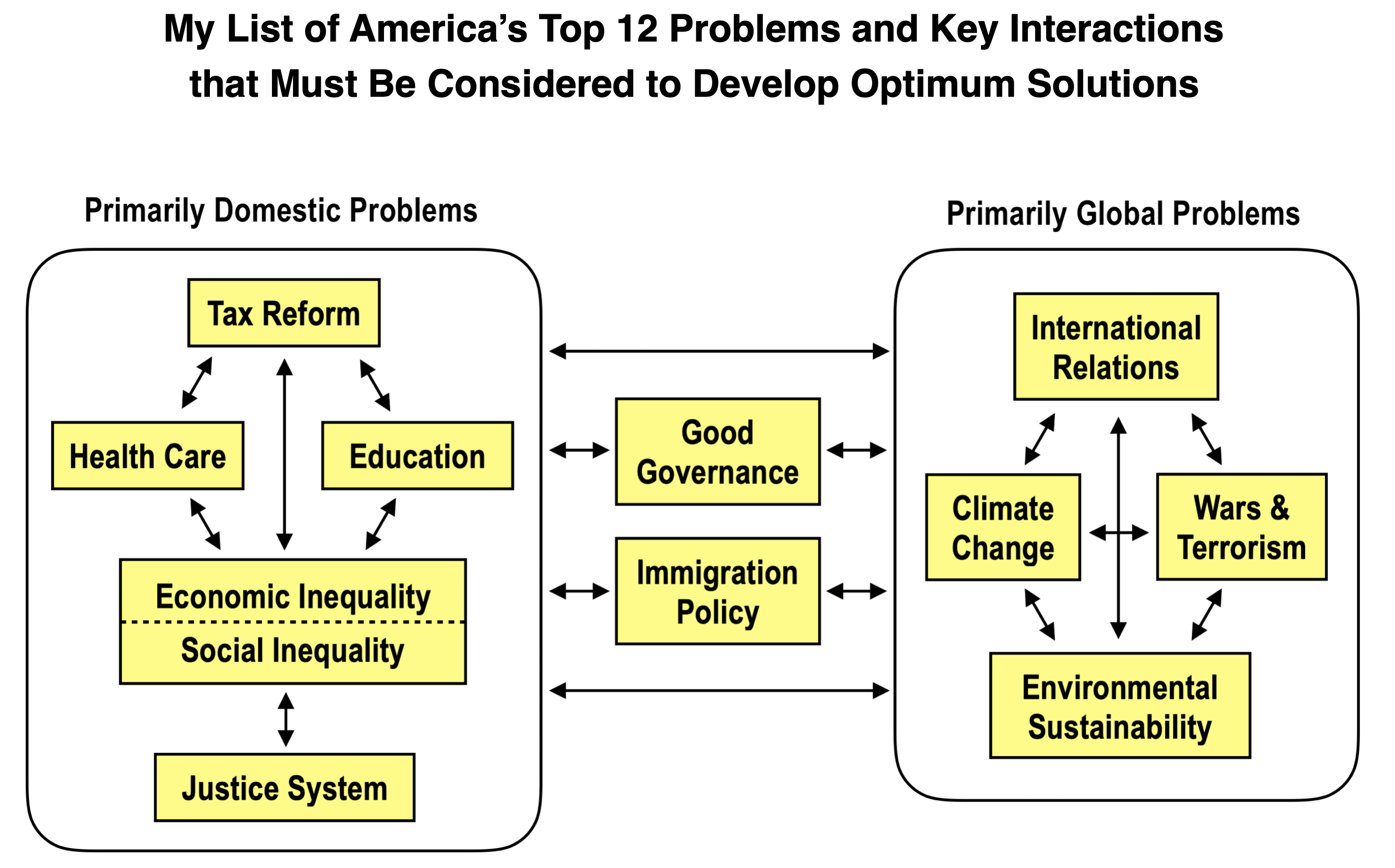 You may be thinking that some problems are just too difficult and controversial to resolve, even with the SE process. However, my experience with systems engineering of complex products is that the SE process can help resolve even controversial, polarizing issues if the following two guidelines are followed:

1. Define the problem broadly. Each problem should be defined broadly enough to enable development of a “system solution" that addresses all related issues. In addition, interactions between the problems should be considered to develop optimum solutions. Engineers call this a "system of systems" solution. The top 12 problems have purposefully been defined broadly, so the most controversial issues (such as abortion and gun control) are embedded in them and can be addressed in a broader context.

2. Avoid arbitrary deadlines. Some problems take time to develop good solutions. Experience has taught us that when SE fails (for example, when designing an aircraft), it is usually because a deadline forces adoption of a half-baked solution. The SE process should be allowed several iterations to develop a good solution, especially for complex and controversial problems. The key to success is to repeat the first five steps of the SE process as often as needed to develop a good solution, and to continue repeating the first five steps thereafter to continuously improve the system.