Additional Information: The most important features of the current tax system and my proposed tax reform are shown in the following table. 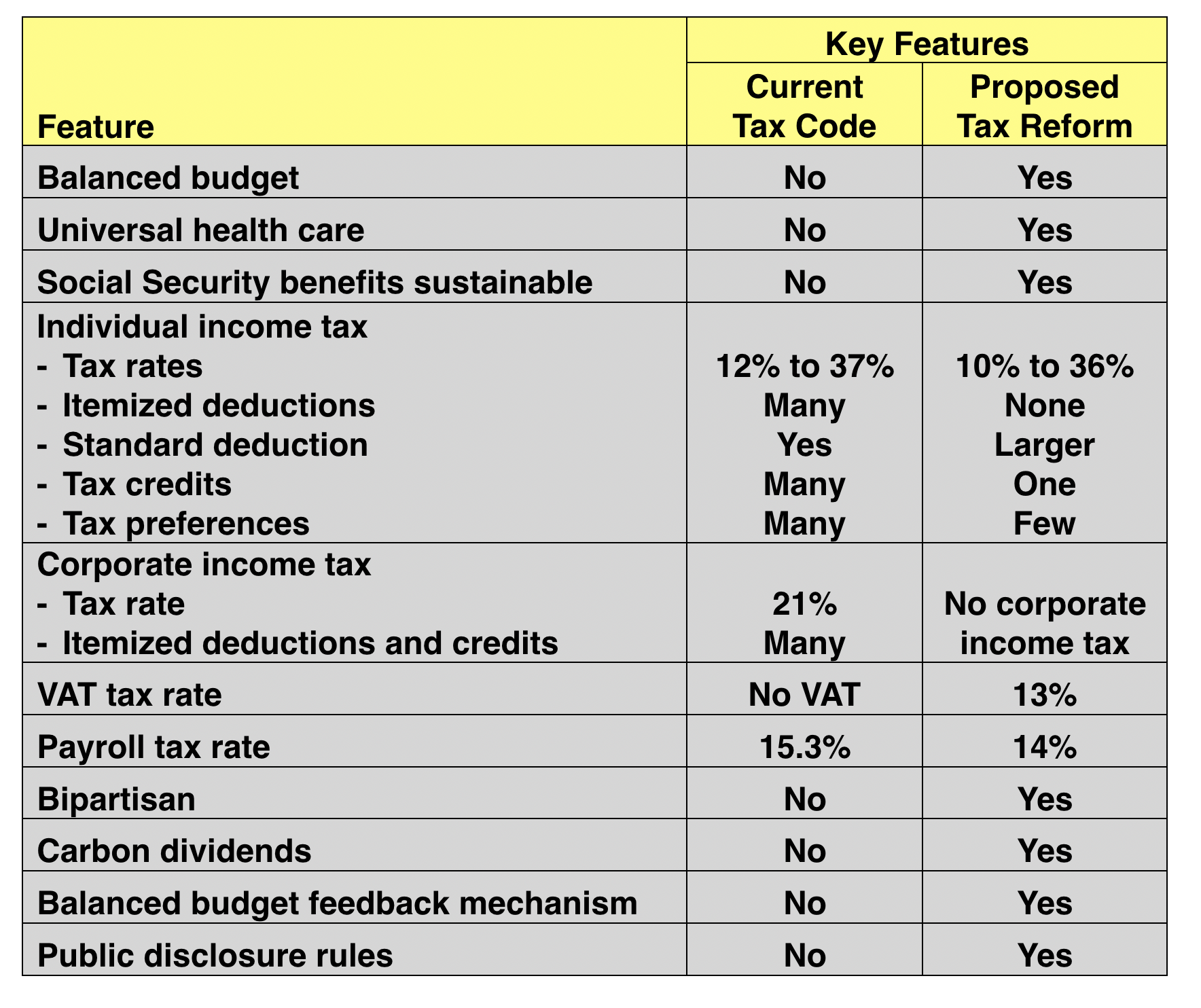 The key features in this table are as follows:

1. Balanced budget: My proposed tax reform balances the federal budget and funds universal health care without increasing the economic burden on taxpayers or decreasing other government services. It does this by (1) reforming the health care system to make it more efficient and (2) using the resulting cost savings to balance the budget.

2. Universal health care: The proposed (new) health care system is called “Medicare Choice” because it provides Medicare for everyone who wants it and premium support for anyone who “opts out” and obtains their own health care insurance.

4. Individual income tax: The proposed tax system simplifies the tax code. All income is taxed at the same (progressive) rates. Itemized deductions are eliminated and replaced with a larger standard deduction. Every taxpayer and dependent receives a $1,000 refundable tax credit. All other tax credits are eliminated. Individual income tax rates are slightly lower than in the current tax code.Business tax: The corporate income tax is eliminated and replaced with a value-added tax (VAT) with a lower tax rate (13%). The VAT is an efficient tax that inherently taxes corporate profits as well as other business costs and expenses. It provides sufficient revenue to fund Medicare Choice. Eliminating the corporate income tax will stimulate business investment and create jobs.

5. Payroll tax rate: The payroll tax is reduced from 15.3% to 14%. It nevertheless provides sufficient revenue to fully fund Social Security since the cap on taxable income is eliminated and no payroll tax revenue is diverted to fund Medicare.

6. Bipartisan: The proposed tax should receive bipartisan support, since it achieves the most important objectives of Republicans, Democrats, and Independents.

7. Carbon dividends: The proposed tax reform includes revenue-neutral carbon dividends to address climate change. Oil, natural gas, and coal companies will pay a steadily increasing fee on their products, and all fees collected will be returned to the American people with quarterly or monthly dividend checks. Every taxpayer and dependent will receive carbon dividends ranging from about $500 to $1,500 annually.

8. Balanced budget feedback mechanism: The proposed tax reform includes an automatic feedback mechanism to encourage Congress and the president to control spending and continue balancing the federal budget in the future.

9. Tax transparency: All candidates for high-level public office must disclose their tax returns. This is done to promote good governance and reduce corruption.

10. Investment in future growth: The proposed tax reform increases investment in the seeds of future growth, especially education and infrastructure. It does this by increasing funding for the Highway and Mass Transit Trust Funds and creating (and funding) an Education Trust Fund.

11. Inequality: The proposed tax reform addresses the problem of economic inequality in four ways: (1) it is a progressive tax, (2) it provides a strong social safety net, (3) it increases investment in education and infrastructure, and (4) it will stimulate economic growth and create jobs, especially for low-income and middle-income taxpayers.

Nearly all the features of the proposed tax reform have been used (successfully) in other countries. For example, all developed countries except the United States have both (1) universal health care and (2) a value-added tax. Nevertheless, the proposed tax reform is unique—not because its features are new, but because of the way they are combined using the principles of systems engineering into an integrated, nonpartisan tax system.